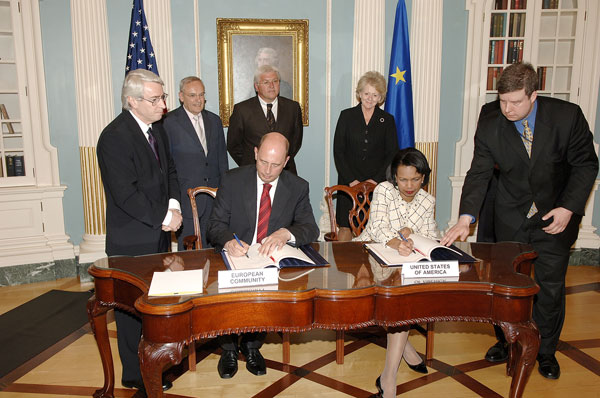 A  treaty is "an international agreement concluded between States in written form and governed by international law,” according to the Vienna Convention of the Law of Treaties. Treaties may also be called accords, conventions, covenants, agreements, charters, statutes, protocols and other terms. To research treaties, it is important to understand terminology used in relation to treaties and treaty actions. (See the lower middle box on this page for some basic definitions.)

As when researching domestic U.S. law, secondary sources can be helpful to provide background, context and commentary on an area of international law, and to identify primary sources of law, including treaties and international agreements.

From the Law Library's homepage, identify relevant publications by searching the SLU Law Library catalog (Catalog tab) or conducting a SLUth - Search Plus (Search tab) across multiple databases and formats.

A non-exhaustive list of other possible starting points for research is provided below.

In part, Article 38 of the Statute of the International Court of Justice states:

1. The Court, whose function is to decide in accordance with international law such disputes as are submitted to it, shall apply:
a. international conventions, whether general or particular, establishing rules expressly recognized by the contesting states;
b. international custom, as evidence of a general practice accepted as law;
c. the general principles of law recognized by civilized nations;
d. subject to the provisions of Article 59, judicial decisions and the teachings of the most highly qualified publicists of the various nations, as subsidiary means for the determination of rules of law.

Generally, the four steps of the treaty research process are stated below:

The sources to consult will vary, depending on whether the U.S. is a party to the treaty, and whether the treaty is bilateral (between two parties) or multilateral (three of more parties). Key research tools, such as the United Nations Treaty Collection and Hein Online's World Treaty Library and U.S. Treaties and Agreements Library may facilitate work on multiple steps in the above list.

Step 4 is beyond the scope of this guide. See the tab on Additional Resources for guidance on this and other advanced tools.

When conducting research on treaties, it is important to have a working knowledge of basic terminology, including:

Accession: process by which a state that was not among a treaty's original signatories becomes a party to it

Consent to be bound: A formal act by a state (such as a definitive signature, ratification, acceptance, approval or accession) by which the state agrees to submit to a treaty's provisions.

Convention: usually, a multilateral treaty that sets forth rules of international law applicable within its subject matter

Entry info force: For conventions, the date that the treaty entered into binding force for the states that had become parties at that time; this date is different for states the become parties subsequently

Objection: a statement by a party rejecting a reservation made by another party, which may render the reservation ineffective between it and the reserving state or may constitute an intention that the treaty not enter into force between the the reserving and objecting parties

Party (or state party): a country that has ratified the treaty or consented to be bound by the provisions of the treaty

Ratification: the international act whereby a state indicates its consent to be bound to a treaty if the parties intended to show their consent by such an act.

Reservation: usually made at the ratification stage, a statement for a party to a multilateral convention that rejects a provision thereof, thus modifying the treaty's impact on that party to the extent of the reservation

Signatory: a country that has signed a treaty, expressing its intention to join the treaty; this may not be the same as the formal step of ratification or accession to the treaty

Understanding: a statement by a party to a convention that expresses an interpretation of a treaty provision, which may limit the applicability of such provision to that country