The standard index to treaties and other international agreements to which the United States is a party is U.S. Treaties in Force (TIF), dated January 1, 2020 (updated with a brief supplement with entries for treaties and agreements added in 2020). TIF can be downloaded as a PDF document from the State Department website. TIF includes two main sections: 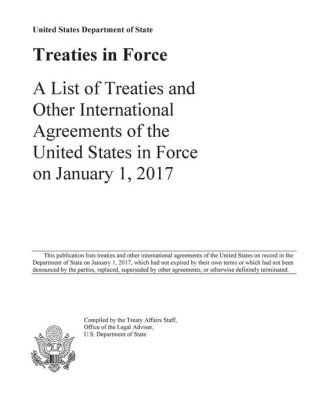 (The box at the bottom of this column explains the difference between treaties and executive agreements.)

For each treaty, TIF provides a full title, the dates on which the treaty was signed or "done," and entered into force, as well as citations to the treaty text. The cited sources may include any of those in the page "Sources of U.S. Treaty Texts" in this guide, or listed in Table T4 of The Bluebook. For treaties made in recent decades, the most common citations will be TIAS numbers and citations to the United Nations Treaty Series (or other intergovernmental sources) or I.L.M. (or other "unofficial" sources).

Kavass's Guide to the United States Treaties in Force (1982 - ; available via Hein Online) can be used in conjunction with TIF. It provides subject indexing for both bilateral and multilateral U.S. treaties, as well as numerical and country indexing.

For additional help in locating the text of multilateral treaties to which the United States is a party, consult the indexes and finding tools discussed on the Multilateral Treaties tab.

For information on indexes to historical U.S. treaties and sources of historical treaty texts, see the box at the bottom on the central column.

Here are two examples of entries demonstrating the two main sections, or indices, within TIF.

First, the historic peace agreement between the United States and Spain (1898) is an example of an entry for a bilateral treaty. The TIF entry includes the dates of signature and entry-into-force, and it cites several sources for the treaty text, including two official U.S. government sources. Most of the cited sources are available through Hein Online's U.S. Treaties and Agreements Library (see box to the left).

Second, from the list of multilateral treaties, the North American Free Trade Agreement (NAFTA), a multilateral treaty indexed under Trade and Investment in TIF. In addition to the dates of signature and entry into force, the entry lists the three states parties to the treaty. There is a notation of TIAS, but not a TIAS number to help locate the treaty text.

The Constitution gives the President the power “to make Treaties, provided two thirds of the Senators present concur.” Contrary to popular understanding, the Senate does not ratify treaties but approves the treaty prior to ratification, an expression of the nation's intent to be bound by the treaty signed earlier. Treaties formed in this way may be referred to as "Article II treaties." (The Senate's role in making treaties is explained here.)

The other form of binding international agreement are Executive Agreements, which are formed without Senate approval. Such executive agreements can be formed by the President due to prior (or subsequent) Congressional authorization or because they come within subject areas deemed to be within the President's Constitutional authority.

Both treaties and executive agreements can be located with TIF.