The category "multilateral treaties" includes any treaty with three or more parties, This includes major conventions to which dozens of nations are states parties; agreements between international organizations or between such organizations and nations.

This tab focuses on two key sources that may be useful for researching multilateral treaties regardless whether the U.S. is a party: United Nations Treaty Collection (UNTC) and Hein Online's World Treaty Library (WLT). See the boxes in the central column. Both of these tools are useful for finding treaty texts and checking the status of treaties: determining if the treaty has entered into force, identifying the states parties to the agreement, and checking whether parties have issued any reservations, understandings or declarations (RUDs) that may limit or modify the treaty's application to those parties.

The United Nations Glossary of terms related to treaty actions may be especially helpful to consult when research the status of treaties. The research guides linked to the Additional Sources tab are also useful in researching treaties in depth.

The United Nations Treaty Collection (UNTC) is a large and comprehensive resource for treaties entered into since 1945, as explained in this UN Library research guide. It is available to anyone with Internet access.

Many major conventions created since 1945 have been deposited with the Secretary-General of the United Nations and published in the United Nations Treaty Series, one of the preferred sources for treaty texts under Rule 21.4.5  and Table T4 of The Bluebook.

For an example, see the entry for the Convention on the Elimination of All Forms of Discrimination Against Women (indexed under Human Rights, along with an Amendment and an Optional Protocol to the Convention). The entry (depicted in part below) provides much information, including the dates of creation and entry into force, the number of signatories and parties, a citation and link to the text in the United Nations Treaty Series. Following this is a complete list of each state that has signed or become a party to the treaty, followed by the texts of Declarations and Reservations by Parties, and then Objections thereto. 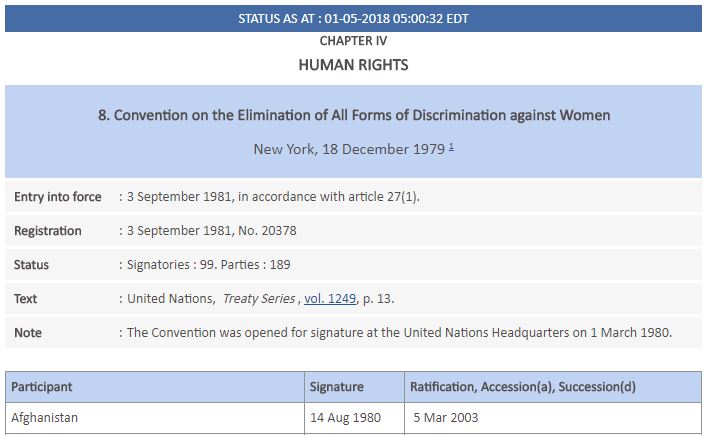 The UNTC is a very large site and can be daunting to use--for example, to research the status of treaties not included in MTDSG. It may be helpful to consult the User Guide and other helpful pages, including the Sitemap, an Overview page, or this FAQ page.

The World Treaty Library (WLT) is available to SLU users through Hein Online, a subscription database. Before using WLT, first-time users are advised to consult the Quick Reference Guide to this very large and varied resource.

Upon entering the WLT, you will be on the Treaty Index tab, which allows users to search one or all of seven leading treaty indexes, both contemporary and historical. Searching treaty indexes can be frustrating, but with persistence, these indexes can be effective tools. If a citation to a treaty text is known, it is helpful to include it. Limiting certain key terms (e.g., extradition or taxation) to the Title field is often helpful. Naming one or more countries in the Country field (and adding a field to include an additional country in your search) also can be helpful.

Within WLT, other tabs bring together UN treaty publications, relevant scholarly articles and more. You can select individual publications from the "All Titles" tab. The Major Treaty Collections tab provides access to publications that provide treaty texts, including, e.g., British & Foreign State Papers.